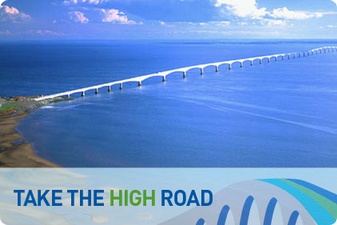 Strait Crossing Development Inc. (SCDI) is the private sector developer tasked by the Government of Canada with designing, building, financing, and operating the Confederation Bridge.

The Confederation Bridge joins the eastern Canadian provinces of Prince Edward Island and New Brunswick, making travel throughout the Maritimes easy and convenient.

The curved, 12.9 kilometre (8 mile) long bridge is the longest in the world crossing ice-covered water, and continues to endure as one of Canada’s top engineering achievements of the 20th century.

After four years of construction using crews of more than five thousand local workers, the Confederation Bridge opened to traffic on May 31, 1997.

Today, the Confederation Bridge is operated by Strait Crossing Bridge Limited, headquartered in the shadow of the bridge in Borden-Carleton, Prince Edward Island.